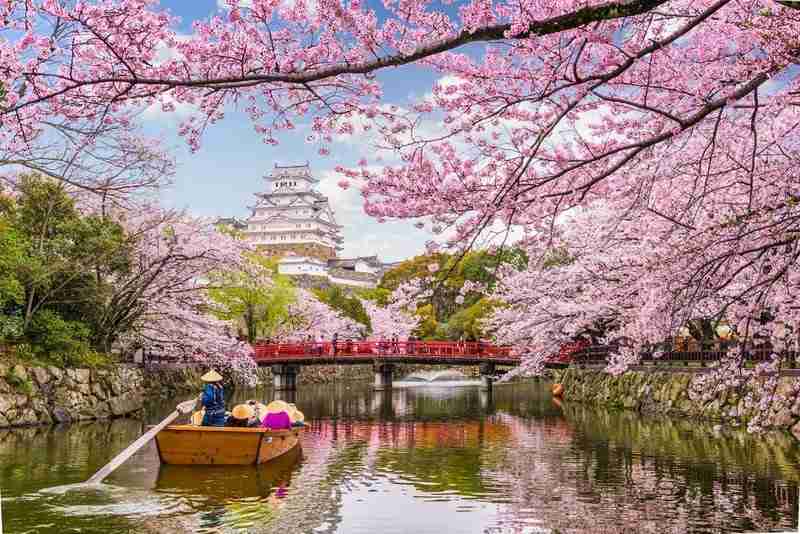 Travelling to new places you’ve never been before can be exciting enough. But when the timing includes a colour festival to photograph, it can be even better. And there are a lot of colourful festivals worth photographing , and to participate in. So virtually pack your bags, and let’s visit some of those great festivals here. 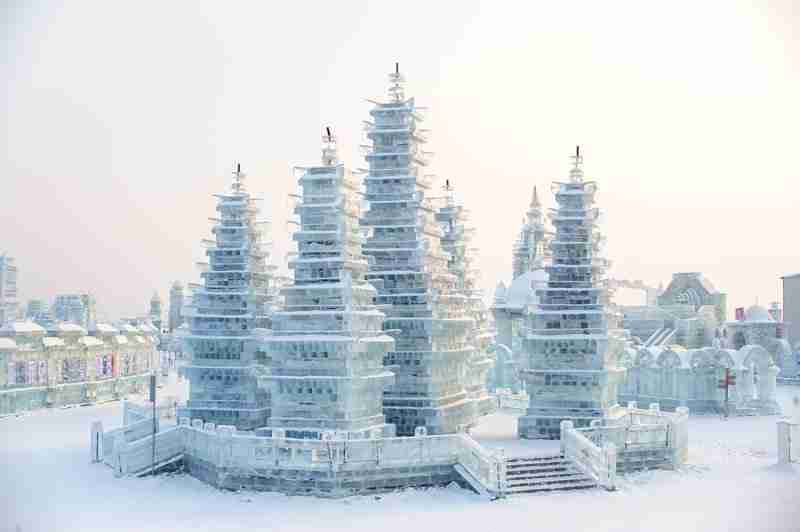 This unique festival takes place during the cold months of January and February in the northernmost and easternmost Chinese province of Heilongjiang, along the border with Siberia. It’s easy to get to, with many daily direct flights from Beijing (2 hrs) or Shanghai (3 hrs).

Since the province is next to Russia, there are a lot of Russian influences. Many are quite visible to the casual observer, like the architecture, the churches, etc. And some influences are more subtle, like in the food, culture and language. It’s a large part of what makes this province special, and another great example of the wide variety of cultures in China.

The Festival itself has been going on for decades, and is now considered the largest ice and snow festival in the world. The events begin in early January every year, and run through late February, depending on the weather. Obviously the colder, the better, in this case.

Photographing the Harbin International Ice and Snow Scultpure Festival is actually a lot easier than you may think. Naturally there are some things to take into consideration with respect to your camera gear. But nothing is that challenging, and if you’re prepared well, everything will work quite smoothly. Of course, having enough warm clothes is also a factor, since the temperatures are usually somewhere around -30°c during the day, and a little bit colder at night. Don’t worry, you’ll be fine!

Despite all the challenges you may face, the images from the event will be wonderful, and you’d experience one of the truly great festivals of the world. 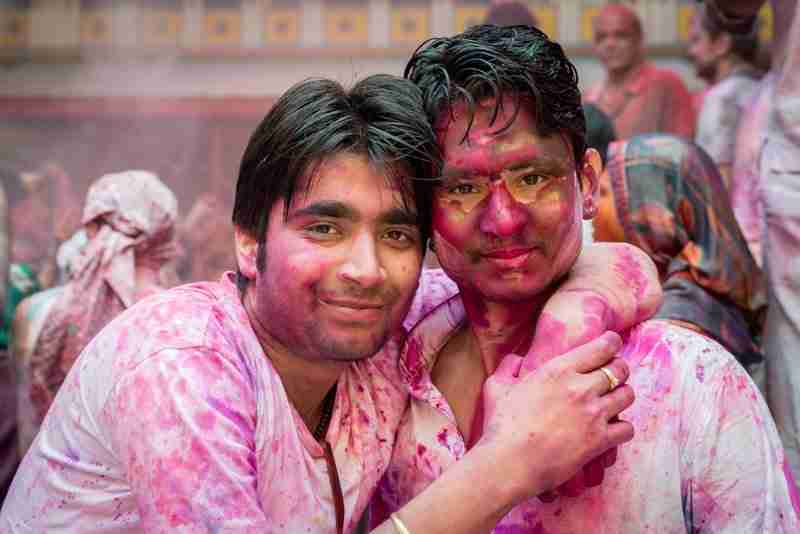 This is one of those festivals that has been copied around the world, in one form or another. But there’s nothing quite like going to the original festival, where it all began. In this case, that’s the small cities of Mathura and Vrindavan, in Uttar Pradesh, India.

The dates for Holi are a bit of a moving target, because it is timed to take place on the night of the last full moon of winter in the Hindu calendar. So the events usually take place in early March, but some years it can happen in February. That said, it’s pretty predictable when the festival begins, because the calendar is readily available.

Holi has been celebrated for thousands of years. Yes, thousands. There are a variety of reasons Holi takes place, some are religious, some are not. But the simplest reason is to celebrate the arrival of spring, and to end conflicts with others, and a day to forget and forgive.

To many Hindus, it is a fun cultural event and an excuse to throw coloured water at friends or strangers. People also smear coloured powders and get their targets completely coloured up. By late morning, everyone looks like a canvas of colours. This is why Holi is given the name “Festival of Colours”.

Of course there’s a lot more to it than this, and that is why it’s worth travelling to this part of India to photograph the event. You needn’t worry too much about damaging your camera equipment. There are easy ways to protect your gear, and it should survive any of the events that take place in both cities. Your clothing won’t survive, though. But it will be a great memory. 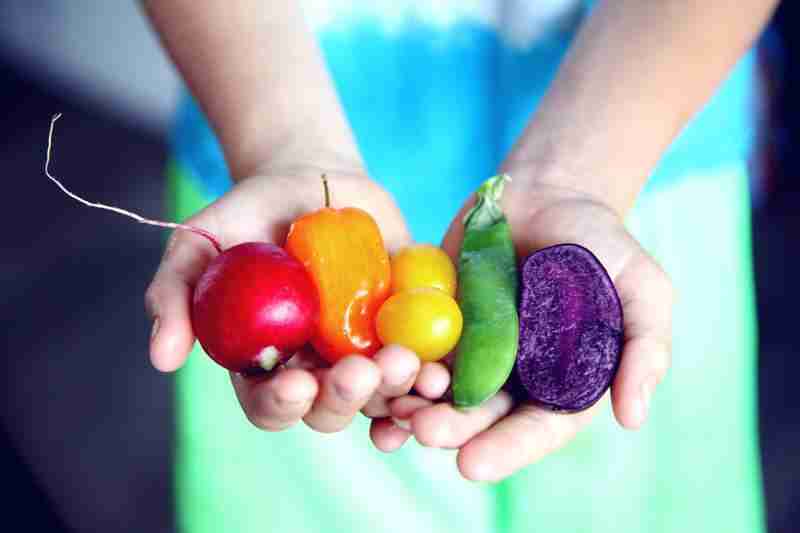 This festival has a fairly pleasant but deceiving name. While it does indeed mark the beginning of the annual Buddhist Vegetarian Festival, it’s actually quite a violent event. Not toward the viewers, but more toward the participants. You’ll be fine.

I didn’t want to show a photo from the event, because for some readers, it may be a little unpleasant to look at. If you’re curious, just google ‘Vegetarian Festival Phuket’, and you’ll have plenty to look at.

The Phuket Vegetarian Festival – or the Nine Emperor Gods Festival – takes place during the 9th lunar month, so usually September and sometimes October. The week-long event is held to celebrate the belief that abstaining from meats, lies, alcohol, sex, arguing, and killing (anything, even bugs), will help purify the mind and body. Fair enough, that makes some degree of sense.

But in addition to the abstinence, devout participants also engage in firewalking and body piercing. They will puncture their cheeks with sharp items, like long knives and bbq skewers. The belief is that the gods will protect them from harm, resulting in little blood or scarring. This isn’t always the case, but it’s good to have that belief if you’re sliding knives through your face.

Obviously this event is not for the faint of heart. But if you can handle the gore (it’s no worse than a horror movie), you’ll be fine. The hardest thing to deal with, in my mind, is the incessant firecrackers that are blasting away everywhere. Bring earplugs, and plenty of memory cards. You’ll never forget this festival. 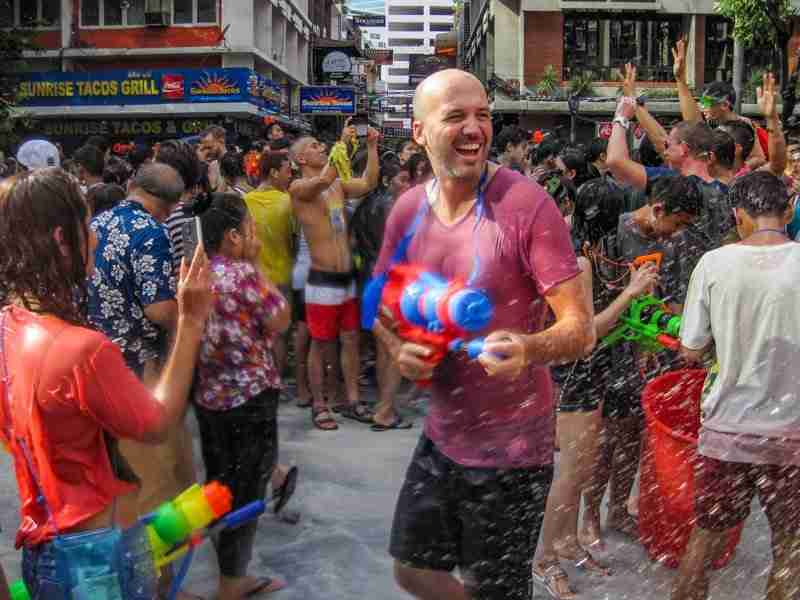 Since we’re in Thailand, let’s discuss the other fun (and less violent) festival that takes place. This one happens all over Thailand – and for that matter also in neighbouring Myanmar, Cambodia and Laos. But it’s a really big event in Thailand and definitely the best place to witness it and/or participate.

Songkran takes place during Thai New Years, which observes the Buddhist calendar. In Thailand, that means it takes place April 13 – 15, each year. Unlike Chinese New Year, the dates remain constant every year. Traditionally, Songkran was meant to celebrate the new year, naturally, by the symbolic pouring of water on Buddha’s hands (on statues, not the actual Buddha).

But of course, it’s evolved a lot since then. Now, it’s colloquially known as the world’s biggest water fight. Things have kind of gotten out of hand over the last few decades, and now the event attracts people from all over the world, who come to participate. It’s helpful to know that April is usually the hottest month of the year in Thailand, so in a way the water fight can be quite pleasant, to shed some of that heat.

Although Songkran takes place all over the country, it’s commonly known that the city of Chiang Mai tends to hold the best events. This is in part to the well-organized parades that take place in the Old City area of the, um..city. It’s pretty common to see elephants, complete with painted faces, lumbering down the streets of Chiang Mai, ready to spray water on willing/unwilling participants. Fun stuff.

As for photography, there’s little need to be worried about damaging your camera equipment when photographing Songkran. Similar to the Holi events in India, there are simple ways you can protect your gear to ensure they are waterproof. Or you could simplify things by downsizing your gear and carry waterproof cameras like a GoPro, or even an iPhone. The goal would be to participate and photograph things, so travel lightly, and wear clothes you don’t mind getting wet.

Bhutan Tshechus – All over Bhutan 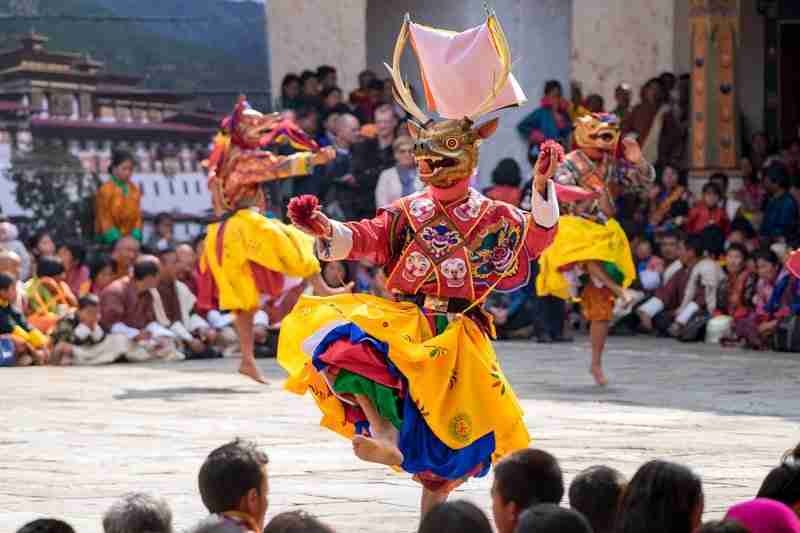 A Tshechu is a celebration held throughout Bhutan, always on the tenth day of a month (Tshechu literally means tenth-day), to commemorate the birthday of Guru Rimpoche. Depending on the community, the month it’s celebrated can vary, and the festivals happen all year long. Tshechus are important and significant events that attract entire communities to come to socialize, receive blessings, and watch religious masked dances.

Bhutanese people believe that everyone must attend at least one Tshechu each year, in order to receive blessings and wash away their sins. All of the mask dances tell stories from the past, and all of them have special meanings to the devout Buddhist citizens of Bhutan.

These festivals usually run for most of a week, but the more important dances and events are concentrated on a couple of days. And while every dzong in the country hosts these events, the more popular ones are held in Paro, Thimphu, and Punakha. It’s a terrific event to photograph, because the costumes are amazing, and everyone is dressed in their finest clothing. 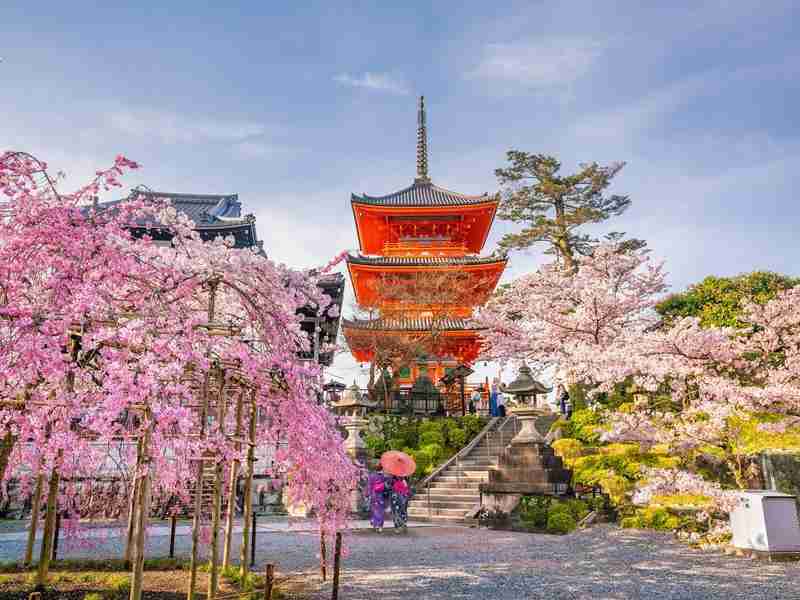 The Hanami festival celebrates the traditional Japanese enjoyment of flowers. Although most people concentrate on cherry blossoms (sakuras), it really refers to all flowers. The event is observed all over Japan, and timing can vary about from north to south because of the climate. But generally it starts around the end of March, and can run as late as early May. The start dates are determined after the blooming forecast is announced.

The sakura blossoms are really quite spectacular to view, and make for some excellent photographs when you get the timing right. The pink blossoms (cherries) and white blossoms (plums) are so much a part of Japanese culture, that images of the blossoms are often used to market the country.

Many cities, like Tokyo, Osaka, and Kyoto have parks with large groves of the cherry trees, and Japanese families will have picnics and parties under the trees. Usually people will enjoy the blossoms during the day time, but they can also be enjoyed in the evenings, when paper lanterns are used to light them up.

Travelling through Japan in April will provide some great opportunities from the colourful festivals worth photographing.

If any of these festivals look interesting to you, be sure to contact us at Private Photo Tours. Visiting any of these destinations on a private customized photography expedition can be a great way to come home with a lot of memorable images. 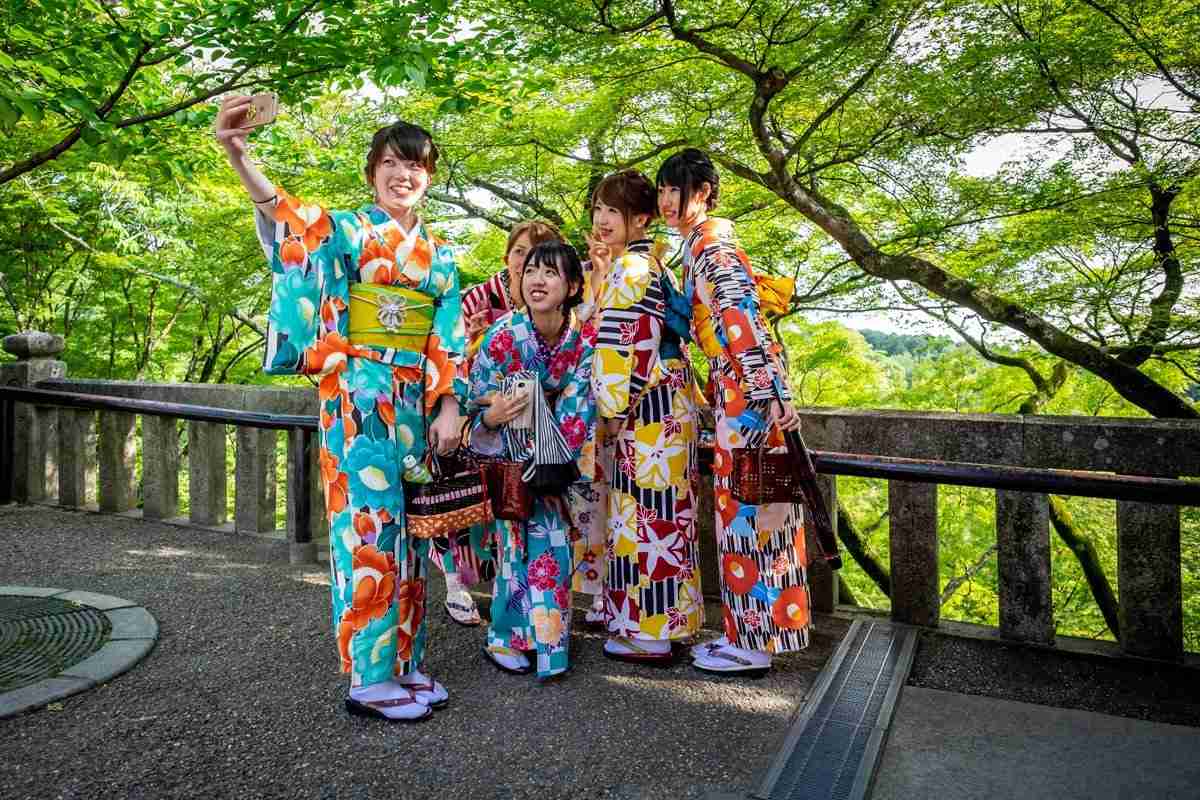 What to Photograph in Japan 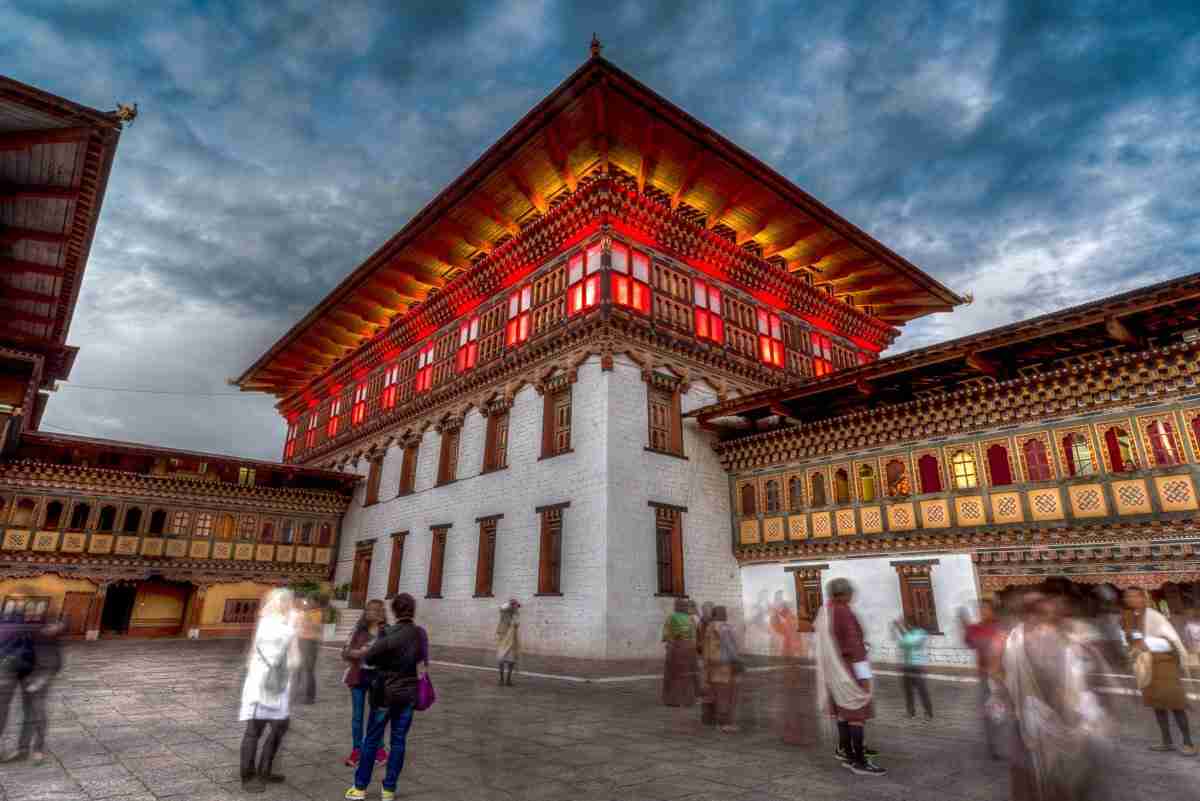 What to Photograph in Bhutan

This website uses cookies to improve your experience. We'll assume you're OK with this, but you can opt out if you wish.
Cookie settingsSureNo ThanksRead More
Manage consent

This website uses cookies to improve your experience while you navigate through the website. Out of these, the cookies that are categorized as necessary are stored on your browser as they are essential for the working of basic functionalities of the website. We also use third-party cookies that help us analyze and understand how you use this website. These cookies will be stored in your browser only with your consent. You also have the option to opt-out of these cookies. But opting out of some of these cookies may affect your browsing experience.
Necessary Always Enabled
Necessary cookies are absolutely essential for the website to function properly. These cookies ensure basic functionalities and security features of the website, anonymously.
Functional
Functional cookies help to perform certain functionalities like sharing the content of the website on social media platforms, collect feedbacks, and other third-party features.
Performance
Performance cookies are used to understand and analyze the key performance indexes of the website which helps in delivering a better user experience for the visitors.
Analytics
Analytical cookies are used to understand how visitors interact with the website. These cookies help provide information on metrics the number of visitors, bounce rate, traffic source, etc.
Advertisement
Advertisement cookies are used to provide visitors with relevant ads and marketing campaigns. These cookies track visitors across websites and collect information to provide customized ads.
Others
Other uncategorized cookies are those that are being analyzed and have not been classified into a category as yet.
SAVE & ACCEPT
Powered by